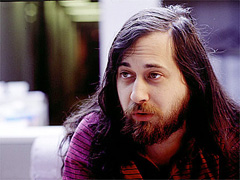 founded the GNU Project and formulated and implemented his “GNU Public License” that defined the rights of users to review source code, make changes to it, and redistribute it, either in the original or modified versions, at no cost (von Krogh & von Hippel, 2003, p. 3). In 1985, Stallman created the
Free Software Foundation
, and he is still the acting president of this “copy-left” movement set up to protect the rights of software users. (Stallman, 1983, para. 1-4).

Roots of the Open Source Movement

In contrast to FSF, the
Open Source Initiative
(OSI) was founded in 1998, and differs from FSF in that it is less political and confrontational, and focuses instead on the superiority of open source software. (
History of the OSI
, para. 16-18). While the two groups have similar goals and work together on many projects, OSI focuses on the “practical benefits” of the various licensing agreements that have subsequently evolved (von Krogh & von Hippel, 2003, p. 4).
O’Reilly
(1999) notes how this has lead to many different offshoots, including some that might be “anathema” to members of FSF, such as the “gated open-source community” model, which licenses out software rights only to its large (paying) user base, and reaps benefits from it users’ modifications, documentation and defect resolution. Another model is to freely distribute source code, and allow modifications and redistribution for noncommercial use, but when used commercially, a different license is required. This is the model which Sun’s Java project follows (p. 36).

In its website, the OSI lists ten criteria which software must comply in order to be considered open source. These are:

As
O’Reilly
(1999) notes, giving programmers access to source code and the right to create derivations allows them “to help themselves, and encourages natural product evolution as well as preplanned product design.” He sees this methodology as clearly superior when creating customized software (p. 34). Coders are encouraged to look under the hood, find bugs and fix them. They are invited to add on to the code, create extensions or plug-ins, or take the code base and re-tool it into something new.

Built with WordPress | Protected by Akismet | Powered by CUNY